Elvis’ birthplace in Tupelo, Mississippi includes a museum and beautiful grounds. “When Spanish explorer Hernando de Soto passed through this area in 1540, he encountered an established Chickasaw Indian civilization nestled in the wooded hills and valleys. The Chikasaw, who had a reputation as fierce fighters, ultimately drove de Soto westward toward the Mississippi River, the ‘discovery’ for which he is perhaps most famous.’ from Guide to the Natchez Trace Parkway by F. Lynne Bachleda. De Soto came with 700 armed men on horseback. It is a story of torture, enslavement and murder.

Tupelo is also the sight of a battle in the French and Indian war, with the Chickasaws joining the British. There was also a Civil War battle here. The town was originally named for the native Tupelo tree. It was home of the Chickasaw and Choctaws for thousands of years. Mud Creek and Town Creek intersect here, and there are many surrounding lakes, so it was a good area for hunting, fishing and planting for the native Americans. As with most places, there is much more to see in Tupelo.

I visited the Chicasaw Council House at Pontatok, where tribal chiefs and leaders met in the 1820’s to adopt laws and treaties (that would not be good). This area also marks the National Trail of Tears. When all was said and done, the European settlers took their land and marched them to Oklahoma. The good news is that many return to their homeland for annual ceremonies.

As Ed Brownfield reminded me, President Jefferson made the Trace a mail route and more of a road between Nashville and Natchez, which took them about two weeks to ride the 450 miles. It was a difficult, lonely and dangerous road. The white man’s use of the trail was to take their crops and goods down the Ohio or Tennessee Rivers on wooden rafts to the Mississippi and to Natchez. They would sell everything, including the wood from their raft. Then they would either ride or walk the Trace back to Nashville or into Kentucky. Since they were flush with cash, they were easy targets for bandits, especially in the sunken areas. They would sometimes travel in groups for safety, but that often slowed travel. 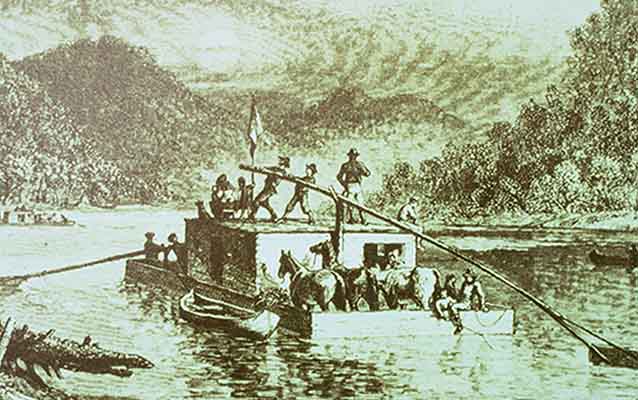