We moved into Victoria to Fort Victoria RV Park. It rained all morning, but by the time we got there, it had stopped. The sky cleared, and it was a beautiful day. The forecast is for rain for the next week, so we hustled out to Butchart Gardens. It is unbelievable what Robert and Jennie Butchart did with their property.

“Robert Pim Butchart (1856–1943) began manufacturing Portland cement in 1888 near his birthplace of Owen Sound, Ontario, Canada. He and his wife Jennie Butchart (1866–1950) came to the west coast of Canada because of rich limestone deposits necessary for cement production.

In 1904, they established their home near his quarry on Tod Inlet at the base of the Saanich Peninsula on Vancouver Island. [2]

In 1907, 65-year-old garden designer Isaburo Kishida of Yokohama came to Victoria, at the request of his son, to build a tea garden for Esquimalt Gorge Park. This garden was wildly popular and a place to be seen. Several prominent citizens, Jennie Butchart among them, commissioned Japanese gardens from Kishida for their estates. He returned to Japan in 1912.

In 1909, when the limestone quarry was exhausted, Jennie set about turning it into the Sunken Garden, which was completed in 1921. They named their home “Benvenuto” (“welcome” in Italian), and began to receive visitors to their gardens. In 1926, they replaced their tennis courts with an Italian garden and in 1929 they replaced their kitchen vegetable garden with a large rose garden to the design of Butler Sturtevant of Seattle. Samuel Maclure, who was consultant to the Butchart Gardens, reflected the aesthetic of the English Arts and Crafts Movement.

In 1939, the Butcharts gave the Gardens to their grandson Ian Ross (1918–1997) on his 21st birthday. Ross was involved in the operation and promotion of the gardens until his death 58 years later.

In 1953, miles of underground wiring was laid to provide night illumination, to mark the 50th anniversary of The Gardens. In 1964, the ever-changing Ross Fountain was installed in the lower reservoir to celebrate the 60th anniversary. In 1994, the Canadian Heraldic Authority granted a coat of arms to the Butchart Gardens. In 2004, two 30-foot (9.1 m) totem poles were installed to mark the 100th anniversary, and The Gardens were designated as a national historic site.

Ownership of The Gardens remains within the Butchart family; the owner and managing director since 2001 is the Butcharts’ great-granddaughter Robin-Lee Clarke.[3]

In 1982 the Butchart Gardens was used as the inspiration for the gardens at the Canadian pavilion opened at Epcot Centre in Orlando Florida.

In December, 2009 the Children’s Pavilion and the Rose Carousel were opened. The menagerie includes thirty animals ranging from bears, to horses, to ostriches, to zebras and mirrors the world from which The Gardens draws its visitors. The designs were hand picked by the owner, in consultation with an artist from North Carolina. The carvings were done by some of the few remaining carvers of carousel art. Each animal is carved from basswood and took many months to complete. There are also two chariots able to accommodate disabled persons.”

On the way back, we drove into Gowlland Tod Provincial Park. It’s not well-marked and a bit hard to find. We parked and were reading the map as a young man walking hand-in-hand with his three-year-old daughter came up asking if we need help. He lives just around the corner and likes to come to hike in the park. He said there are so many places to hike around the area, you could never do it all. Some are difficult, but the views at the end are often spectacular. He had some suggestions to try, but with all the rain coming, I don’t know what we might do. As we parted he said, “Enjoy this beautiful day before the next four months of rain”. His little girl sneezed. In her little raincoat, holding an apple she had taken one bit of, the little girl and her nice father strolled off to the trail head.

We stopped off at Six Mile Pub for a beer. It is the oldest pub on the island, and in old Tudor form. It is what a pub should be. A fire burning inside. Lots of people of all sorts spread about. The bartender was very patient explaining all the beers on tap, and the menu looked excellent. We settled on an appetizer of vegetarian samosa with curry paste and pear chutney. Sitting with her back to the fire, Martha was quite content. 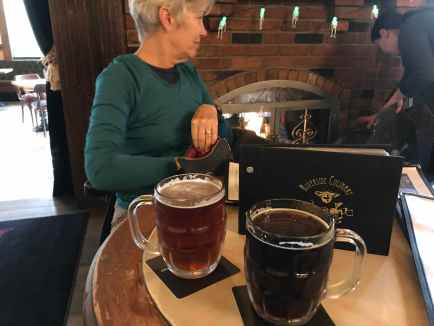 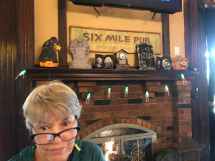 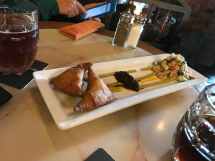