It was a blustery, cloudy day when we set out. Driving to the south end of the Burin Peninsula, we hiked to Chamber Cove Trail. It starts out crossing a pretty stream, then up a gravel road. Raspberries grew all along the road. We paused several times to pick and eat some. There were some blueberries also, but not a lot. Up, over and down the hill to the coast we walked to the first of a number of signs. 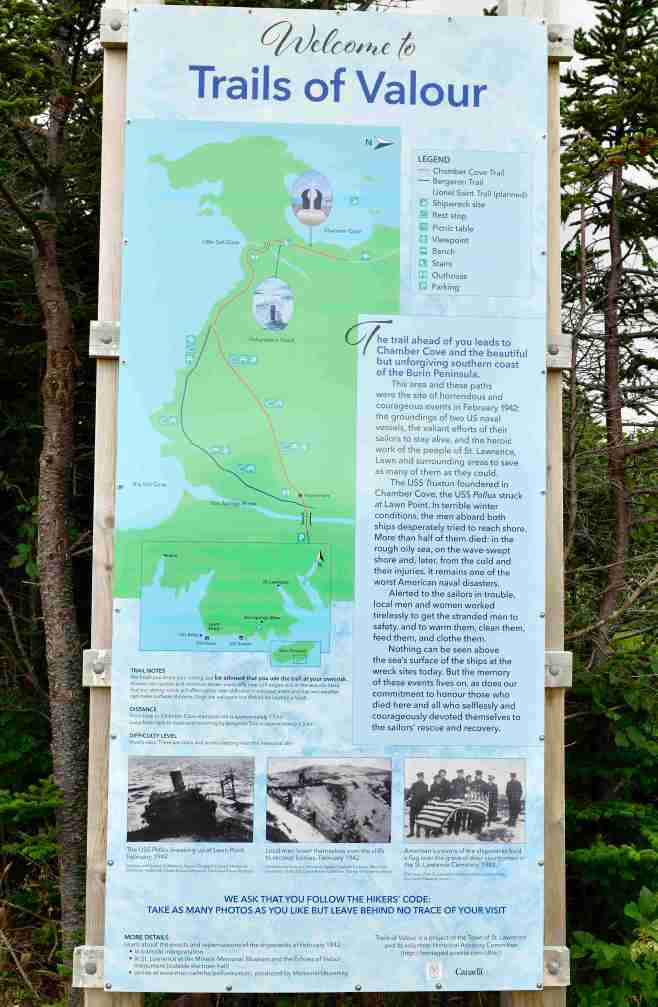 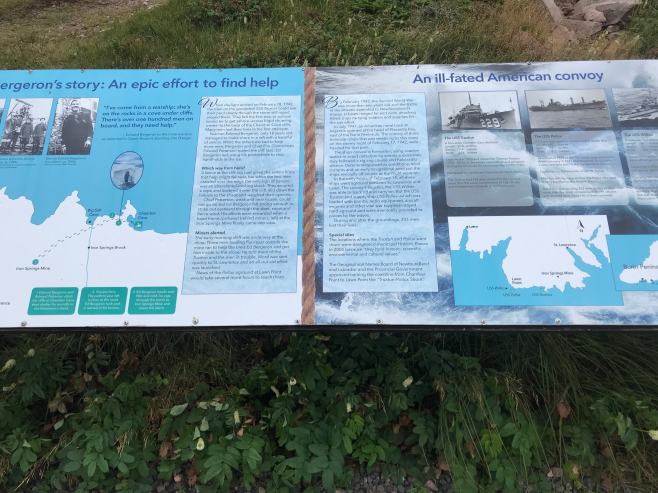 This is the site of a February, 1942 wreck of the USS Truxton and Polux warships during a terrible winter storm. As we walked along the cliffs, we learned about the tragedy along with the heroes of the days. 18 year-old Ed Bergeron made it to shore with two others in a boat. They found a fisherman’s shack, a good sign there may be help nearby. Bergeron was the only one capable of traveling in the snow, but he trudged along the cliff to a lead mine, where people were working. He got there just as they were changing shifts, so people were above ground. They immediately went to help. The ships were breaking up against the rocks. The miners lowered themselves down the cliff with ropes to rescue those they could. In time, word got to the nearby towns of Lawn and St. Lawrence came to help. Women came out to help wash survivors covered in oil that spilled into the cove. they built fires to keep them warm and brought clothes. Many were carried to a make-shift hospital in St. Lawrence. The Iron Springs Mine Dry House served as a temporary first aid station. 203 sailors perished, but 183 were saved. In 1954 the US Navy build a hospital in St. Lawrence in gratitude for their work. Years later Newfoundlanders would come to the rescue of others in Gander. 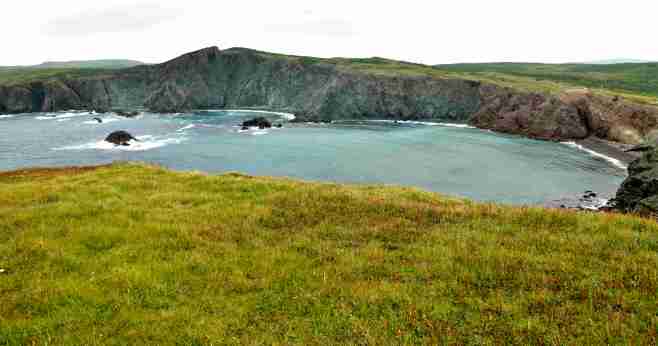 On this day, the winds blew 20 mph and it was cool, about 60 degrees, and the seas were rough. I wouldn’t go in that water today. I can’t even imagine in February, 1942! But if you wanted to live on that day, you had to dive into the frigid water with fierce waves crashing against the rocks. Then it started to rain pretty hard, so we made our way back to the car, the way Ed Bergeron walked.

We had a nice lunch, inside the truck, at a nearby beach, watching gannets dive like rockets for fish. Driving back out, we noticed a bunch of raspberries, so we stopped to pick a half bottleful. 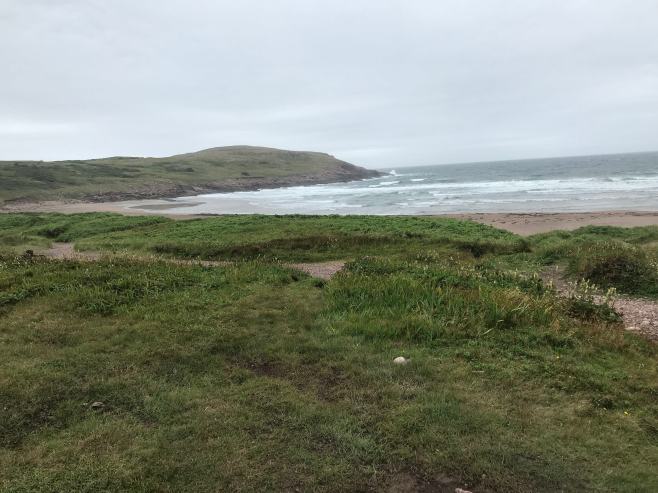 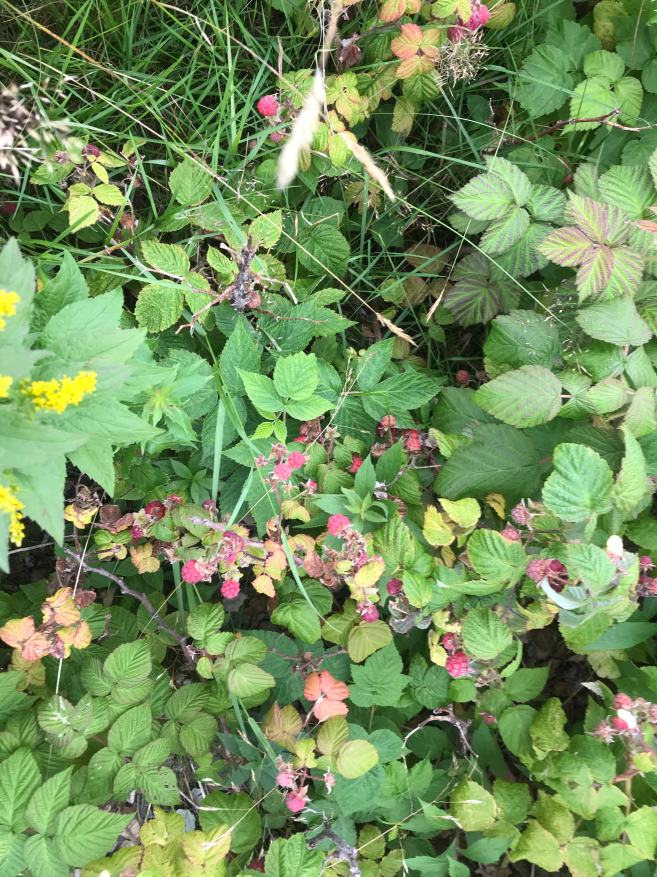 Now with a pouring-down rain, we headed back to camp. We had left windows open, and we have been dealing with a leak in our wounded roof. A little water had come in a couple of windows, but not bad, and the roof had not leaked:} Luckily, it cleared up long enough to cook dinner on the Cobb Grill. 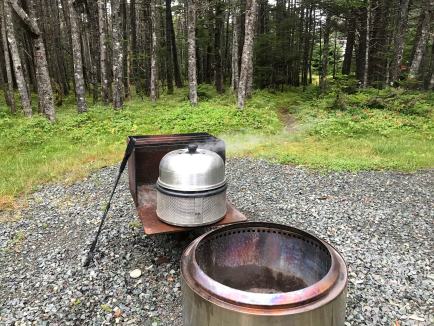 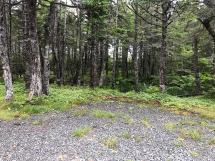 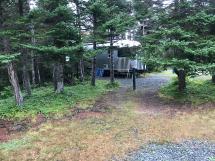 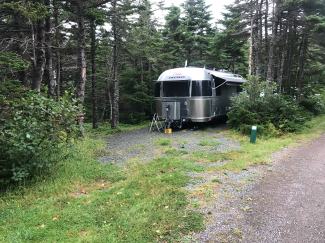 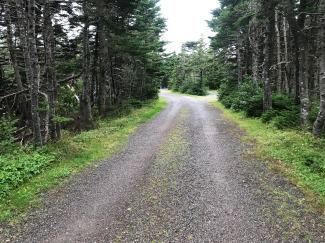