We had previewed a couple of campgrounds on our way to Les Escoumins and found a great one. It’s nice to be able to drive through a campground to preview it. Camping Bon Desir is one of the most beautiful campgrounds I have ever seen with tent and camper spots right on the St. Lawrence. It is setup on different levels of a hillside so each level has great views, like a giant ampitheater. It has several lakes in the campground and there are hiking and bike trails, so today, we packed up and left Tadoussac to move a whole 25km nord (north). Arriving at the campground, the office was closed and the sign on the door listed the taken spots. Just go and pick a spot and tell them when they open at 2:00. There are so many beautiful spots, it was hard to choose, but we settled into #30. The wind was blowing hard and it was still chilly.

We needed groceries, but Martha suggested walking a trail at the north end of the campground. All we had was the campground map, so we had no idea what we were doing except it said 3K. It turned out to be a National Park hike along the St. Lawrence. We had on Keens and a lot of layers that I soon started shedding. I stopped to look at a track that did not look like a person, unless they had a very flat and wide foot. There were no claw marks, but I suspected a small bear. There were beautiful views of the river along the way. Soon we started climbing to the top of a ridge, then winding our way around the cove. I had seen a lighthouse on top and suspected we were going there, but it was more than 3K. After walking for over an hour, we came to a park entry hut. Fortunately Martha had brought the park passes. Those things have really paid off! We bought two types of passes, the National Park passes, which are good for two years, and the Quebec passes, which are the only ones we have used so far. Although most of the parks we have visited are called National Parks, they only take the Quebec pass. You pay for it after eight visits or eight days any park. Then you get one free night of camping and 15% off purchases at their stores.

There is a lot of history of the lighthouse and how they powered their foghorns. Today with all the navigational technology, there is no longer a need for foghorns. They even have a coffee shop. We walked down the trail to a viewing area, which is very cool. It is a rocky outcropping on a point jutting into the St. Lawrence. The wind was still blowing off the water making it chilly, but there is also a glassed-in shelter with a porch on the front where people were gathered. Martha was soon talking to a handsome park ranger whose mission was educating people about the whales and the area. He said it was 300 meters deep right off the point! I asked him if we were at the end of the whale season. Happily, he said no, we are right in the middle. Soon he pointed out a Minke whale about a half mile away. Of course they go down to feed, then surface for air. The ranger said they could surface anywhere, but soon he breached closer to us, and Martha saw him in her binoculars as the crowd in concert said,”Ahhhhh”. 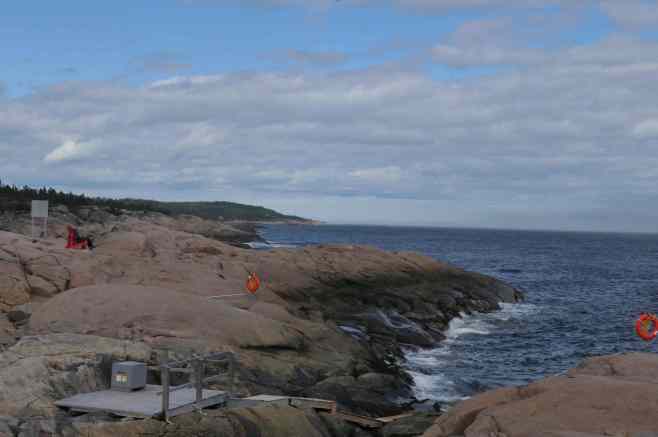 I held the camera at the ready for quite a while, but nothing happened. We happened to be looking straight ahead when he breached right in front of the rocks. Fortunately he gave a big blow to attract everyone’s attention to a concert of “Ohhhhhh”! It was very cool. We will have to make regular trips here – maybe driving up. Walking back toward camp, I heard bells as Martha shoved me off the path. A very professional-looking biker came past saying, “Excusez-moi”. He was riding fast in his official outfit. I was struck by his massive thighs. It wasn’t long before he rode back toward us and stopped, saying he saw a big, black bear and decided to turn around. He was nice enough to warn us and we chatted a bit before he rode on. He rides in competitions and had just done a training event at Massanutten close to where we live. A very nice man, he pilots ships on the St. Lawrence and exercises regularly on the trails along the river. Martha let me walk in front as we continued down the trail. Now we noticed the side trails. I looked for more tracks, but kept my eyes up mostly. Just as we got to camp there was a big trail crossing a boggy creek and going up to a tent site. I noticed it when we started the hike and wondered if people really would walk through that water. Now I realized they wouldn’t.

With boulangerie Pizza and a salad for dinner, we sat in front of a nice fire and marveled at the view. The wind had died down and it was a perfect evening to watch the stars come out. What a spot!